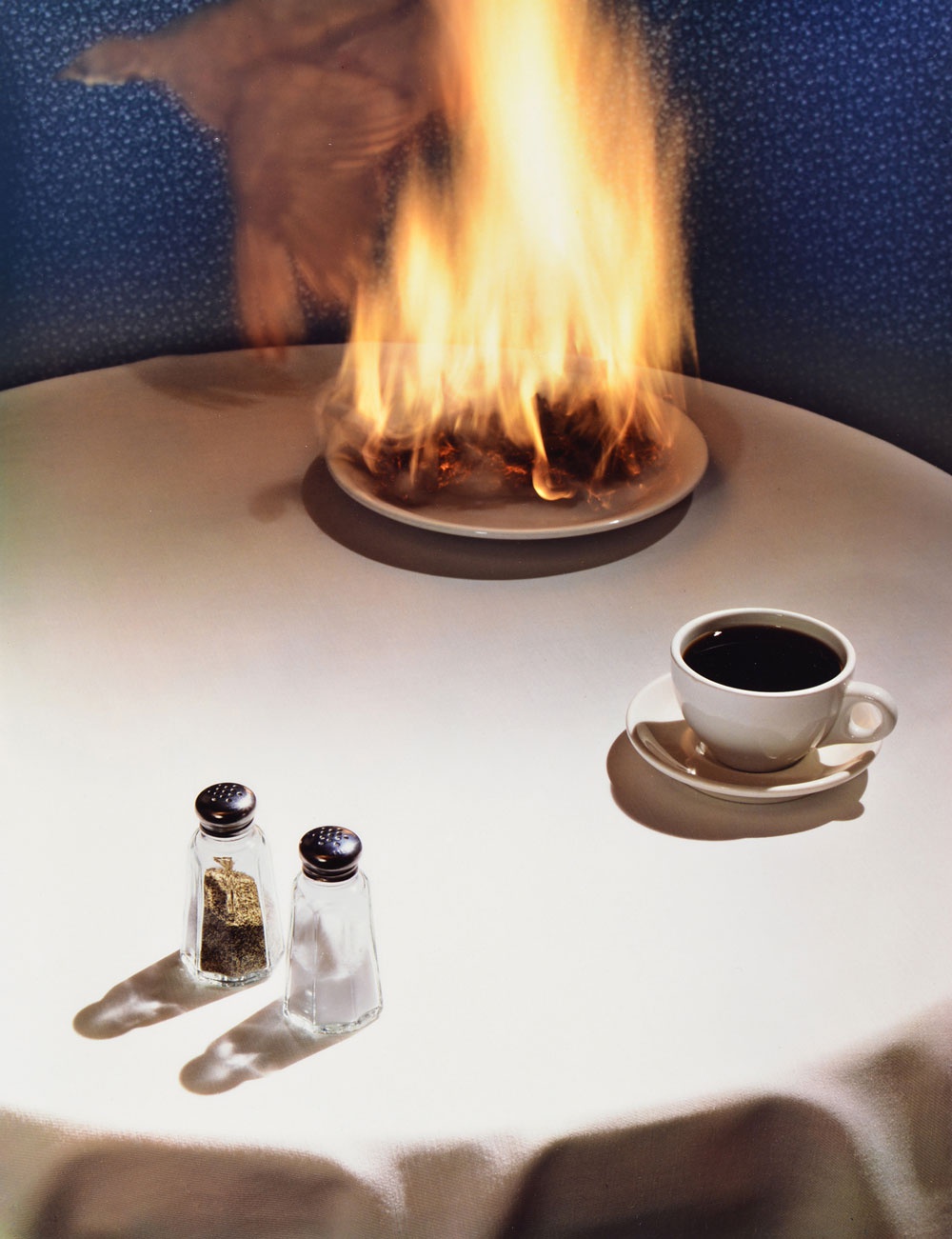 With a large grouping of esteemed photographers—Jo Ann Callis, Tania Franco Klein, Kennedi Carter, Graciela Iturbide, Katsumi Watanabe and others— it’s the curator, not the artists, who moderates the conversation.

In a world defined by schisms and polarities, and a year-long hiatus on reality, “Loosely Stated” suggests a taciturn yet stimulating alternative to slackening mores, a pomerium free from constellated hatreds. With its many single-subject photos of women and by women, of men and women of color by women of color, this exhibition is many things: an unlabeled feminism, a non-competing intersectionality, a polite insinuation of unspeakable American horrors. It denotes without crystallizing into fragile definition. No image steals the spotlight; each contains depth and multitude without transgressing upon its neighbor.

In Jo Ann Callis’ Salt, Pepper, Fire (1980) we see a tableaux: white tablecloth, full cup of coffee, one salt and one pepper shaker, and immolating dinner plate—but do we notice the orange-washed phoenix sidling to the left? In haste, we miss the escaping bird; without which, the work loses its horrifying implication; patience snaps the image into sublime revelation. More than simple fire, this is a scene of gripping violence: animal sacrifice fleeing unobserved ritual. Perhaps patience is still valued in a world of breakneck consumption, expedited biases and rewarded delusions. If we take time, reorient ourselves to the sensed world and begin to hear with our eyes, multiple dialogues are revealed. 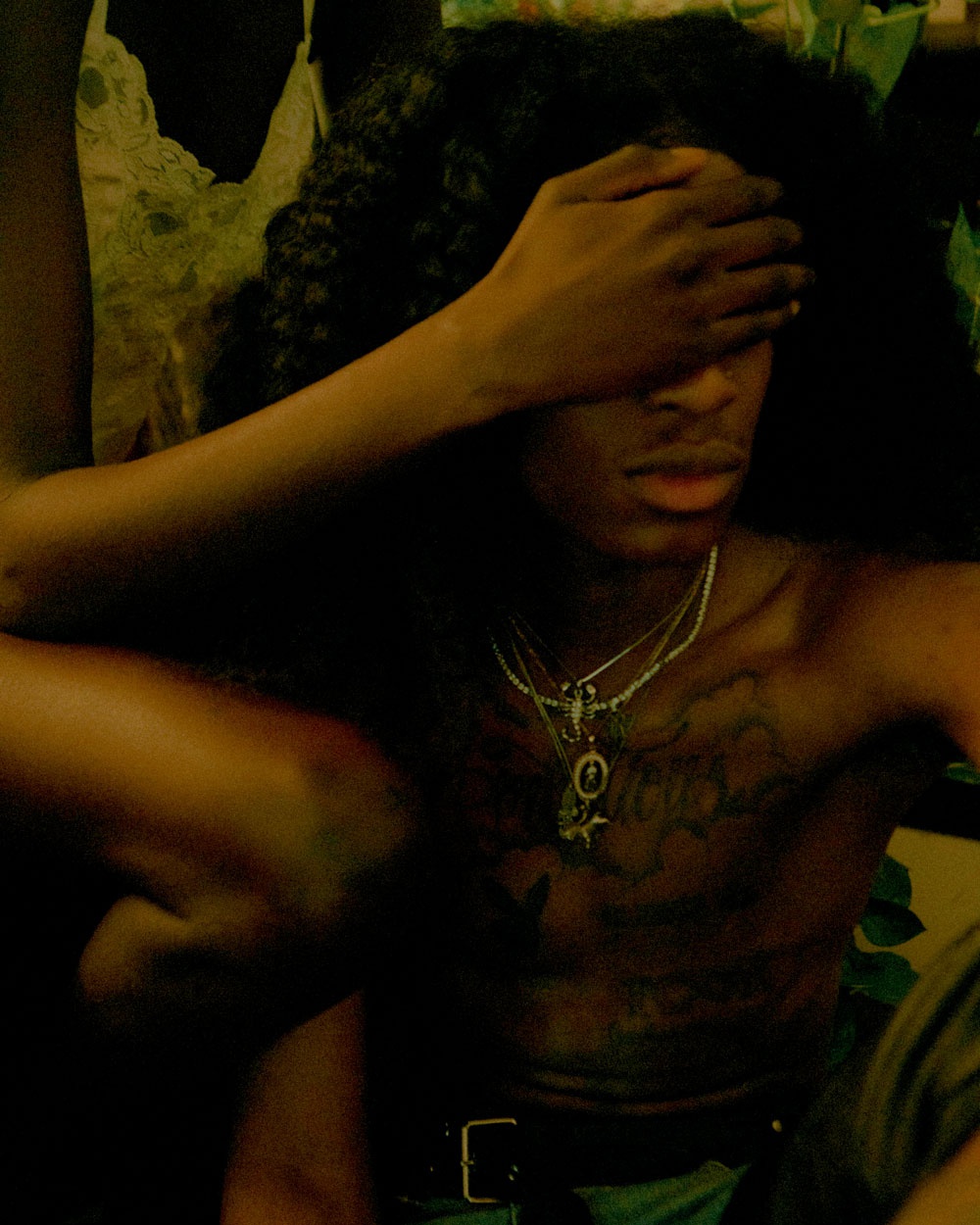 Kennedi Carter, Soon As I Get Home II, from East Durham Love, 2019, courtesy of ROSEGALLERY.

Pioneering Los Angeles artist Callis has clearly influenced the emerging Mexico City-based Tania Franco Klein. In another room, two opposing walls feature Black subjects in contrasting representations: Kennedi Carter’s Soon As I Get Home II, from “East Durham Love” (2019) is a cropped closeup, an Ono/Lennonesque portrait of a man receiving affection from a woman (she is cropped, and only emerges with patient viewing); it utilizes colors that are oil-painting-rich and connotes a re-seized colonial mystique. Opposite, selects from Melodie McDaniel’s wide-shot black-and-white portraits of rider and horse possess cinema verite sprezzatura.

Yes, this room replete with female gaze doesn’t call attention to the label; it needs us to investigate and arrive at its reality. While not vying for huge exclamations or jaw-dropping denouement, “Loosely Stated” reminds us that the best conversations are never one-sided; that they are, at best, unresolved. It’s also a stark reminder of power exercised through inhibition; majesty, if you will. But can reconciliation of atrocities forge with this updated Neo-American ideal? Since we are formalized around a global anxiety, one that fissures into all aspects of our lived experience, inverts our perceptions, problematizes our instinct to care and to hug and to love, perhaps stillness represents the true act of defiance.

Read the full review at artillery.com.